We use cookies in order to improve the quality and usability of the HSE website. More information about the use of cookies is available here, and the regulations on processing personal data can be found here. By continuing to use the site, you hereby confirm that you have been informed of the use of cookies by the HSE website and agree with our rules for processing personal data. You may disable cookies in your browser settings. 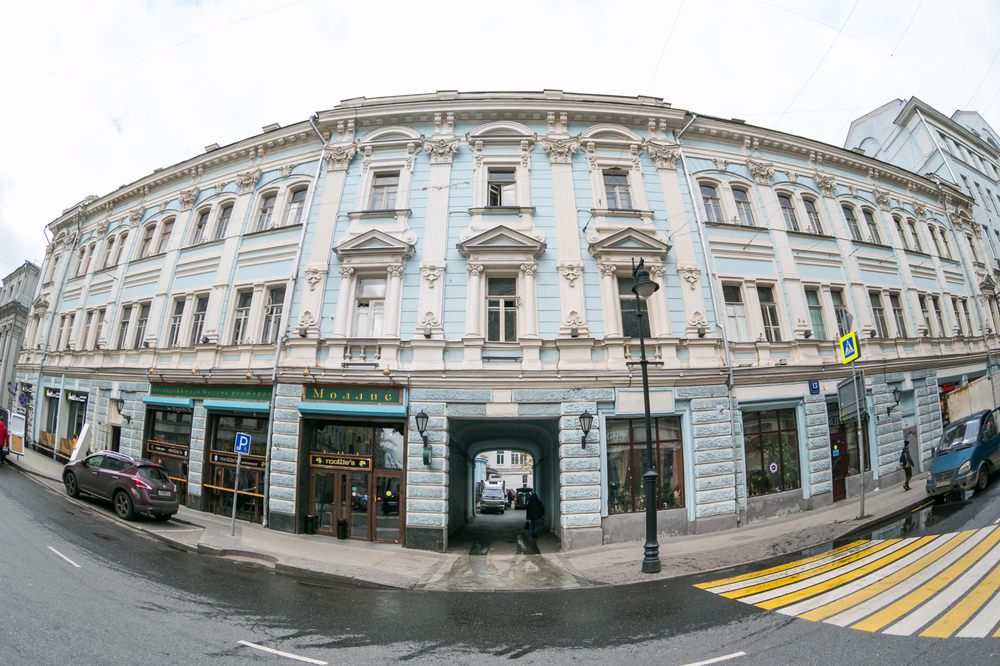 From the beginning of the 18th century and up until 1837, the property was owned by the Saltykov noble family.

In 1825 the School for Drawing as it Relates to Arts and Crafts opened here (School of Technical Drawing), founded by the well-known philanthropist Count Sergei Grigorievich Stroganov.

He believed that the ‘art of drawing’ was as vital for people in the technical professions as it was for artists. Today this school is called the S. G. Stroganov Moscow State Artistic and Industrial Academy. As Chairman of the Moscow Society of Russian History and Antiquities, Stroganov would personally pay to equip his annual scientific and archaeological expeditions to southern Russia. One example of discoveries made during these digs in Crimea include the Kerch treasures and Scythian Gold, currently stored in the Hermitage. 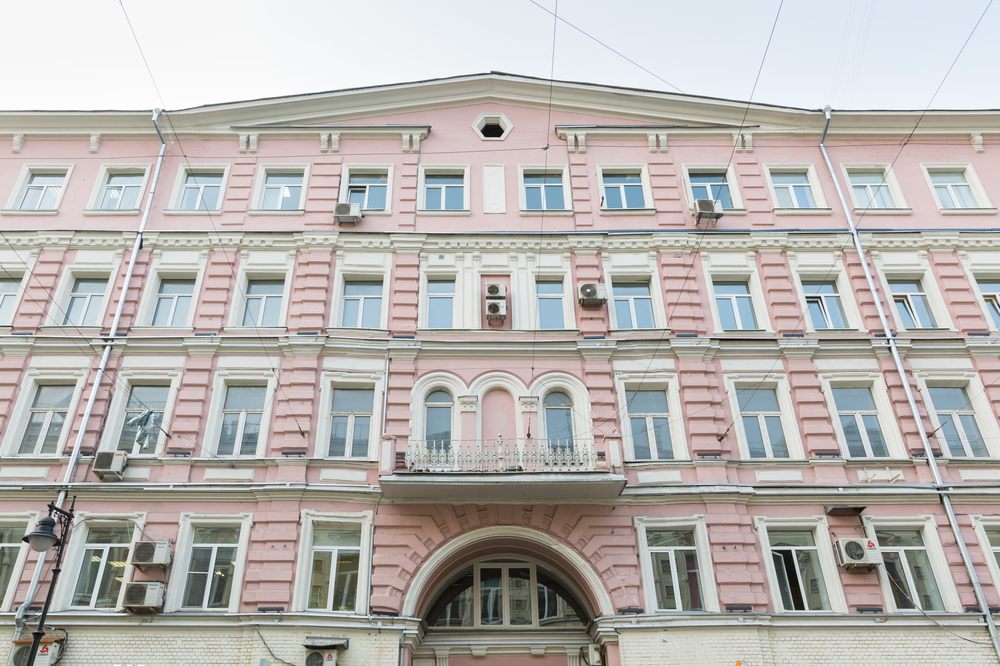 In the late 19th century, this building housed the ‘Rodina’ (Motherland) reasonably priced furnished rooms arranged in corridors. At various times they were home to the sculptor A. S. Golubkin, mathematician N. A. Shaposhnikov, Orientalist and academic M. O. Attaya. This was a popular, convenient and cheap way of living in Moscow at that time. The artist Ilya Repin liked to stay here, and in 1884 settled here, which made sense since he would visit his friend V. D. Polenov, who also lived on Myasnitskaya Street, and was exhibiting his work at the School of Painting, Sculpture, and Architecture. 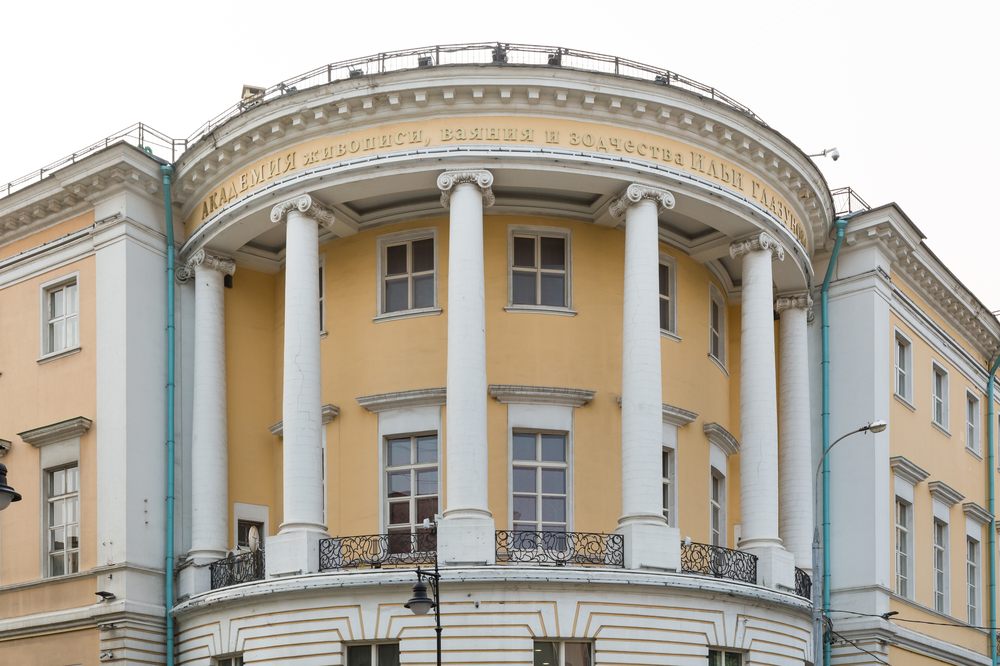 This part of Myasnitskaya street in the late 18th century was owned by the Yushkovs, and a neighboring side street was named after them (now Bobrov).

In 1780 the estate became the property of Lieutenant General Ivan Ivanovich Yushkov, for whom the current building was constructed. In 1838 one of the halls in the building was leased by the Moscow Society for the Arts for its ‘Public Drawing, Landscape and Sculpture Classes’.

One of the founders was Alexander Dmitrievich Chertkov, an academic and enthusiastic collector of books, who lived on Myasnitskaya and who later formed the Chertkov Library collection.

In 1865 these classes were merged with those at the Moscow Palace Architectural School, and were renamed the Moscow School of Painting, Sculpture, and Architecture (MUZhVZ). A host of well-known artists, sculptors and architects studied and taught here: Konstantin Melnikov, Vasily Perov, Vasily Polenov, Alexei Savrasov, Valentin Serov, Konstantin Korovin, Isaak Levitan, Mikhail Nesterov, among others.

For 16 years the building was home to the Pasternak family. Each spring the school hosted exhibitions of work by the Wanderers (Peredvizhniki), and at one of them the artist Leonid Osipovich Pasternak (Boris Pasternak’s father) met Lev Tolstoy. Pasternak subsequently illustrated the novels War and Peace, and Resurrection, and also completed family portraits of the Tolstoys.

After the revolution, MUZhVZ and the Stroganov school were brought together into the Higher Artistic and Technical Studios, known as VKhUTEMAS. The sign on Myasnitskaya went on to change several times in the years that followed: VKhUTEIN, Institute of Fine Arts. Today it is home to the Russian Academy of Painting, Sculpture and Architecture of Ilya Glazunov.

No. 23. The Church of Frol and Laurus

The Church of Frol and Laurus stood where the lawn is today. In the 16th and 17th centuries, Myasnitskaya was known as Frolovskaya Street. Before the 20th century, the Church housed numerous antiquities, 17th century icons, and the paintings that decorated its interior included depictions of Greek philosophers such as Plato, Aristotle, and Solon, holding scrolls.

In 1900-1901 its restoration was managed by the chairman of the Moscow Association of Architects Konstantin Mikhailovich Bykovsky. The artist N. A. Stepanov, who had moved from St Petersburg to Moscow, rented an apartment in the Church house. And he moved the editorial office of his humorous magazine Alarm Clock with him.

Stepanov was a retired state councillor who enjoyed the art of caricature. He illustrated the ‘Music album’ for his son-in-law, composer Alexander Sergeevich Dargomyzhsky, and together with the poet V. S. Kurochkin published the satirical magazine Iskra. The church was destroyed in 1934. 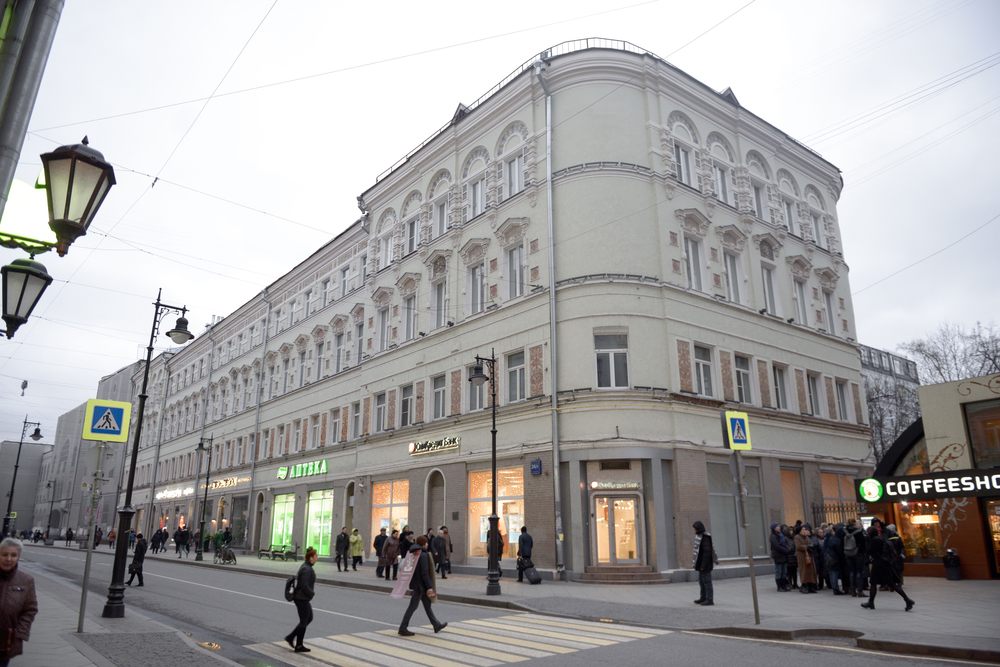 In the 18th century this building was owned by the Lopukhins and then subsequently by the Stroganovs. In the 1830s, it briefly housed the Technological Institute, and the Ministry of Finances. In 1843, it was used by the Stroganov Drawing School, which that year became a state institution, enabling talented children from poor families to enroll.

In 1872, the school was renamed the Central Stroganov School for Technical Drawing. The courtyard wing housed the Real School (or Reformist Lutheran School) headed by the famous teacher Ivan Ivanovich Fidler.  It had a chemistry lab and choir, and there was also a unique aquarium for the children and adults who studied here. The lecture hall hosted classes run by the first Russian Gymnastics Society, attended by Gilyarovsky, Chekhov and Shchukin.

In 1901, the Stroganov school received the title ‘Imperial’ and the decision was made to build a complex of income-bearing buildings on-site. The project was implemented by F.O. Shekhtel in 1905-1906. The buildings housed numerous offices, shops, and apartments for artists.

The upper floors of the wing housed the artistic school of Fedor Ivanovich Rerberg and the Moscow Association of Artists. After the revolution, the building was home to the Main Directorate for the Electrotechnical Industry, where the Lenin Plan for Electrification of Russia was developed, as indicated by the memorial plaque.